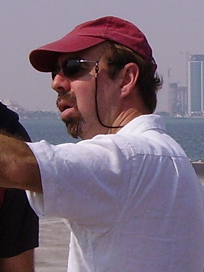 Stéphane Bégoin began his career as a professional editor, and collaborated on numerous television programs such as Les enfants du rock, Océaniques, Désirs des arts. At the same time, he met and worked with people such as Pierre Trividic and Jean-Luc Léon, who inspired his love of the documentary genre and his flair for strong, well-constructed stories. After ten years as an editor, he decided to make his own films. His work covers a wide range of issues: human interest, spirituality, profound scientific reflection.

He has directed Cayeux, pleine et basse mer, (a documentary about the Baie de Somme and its inhabitants); Roger B., alchimiste (a documentary about the personal journey of a man in search of the philosophic stone); Et Sapiens inventa l'Homme (a documentary devoted to the earliest modern men) and Du coté des pères, a series about paternity. Stéphane has travelled widely on various shoots and has had the occasion to encounter native peoples such as the Bushmen of Namiba, the Inuit of the Canadian Arctic and the Shipibos in the Amazon (Le Voyage de Charlie). In Catholique malgré tout, he questions the future of the Cahtolic Church in the company of men and women of the faith. In L’homme au nom guillotiné he accompanies a man on his quest for identity.  Science has given him the opportunity to work on specific enigmas in Le mystère Stradivarius and La grande épidémie. His next films will also have a scientific framework : Hatshepsout et le pays de Punt; Lascaux, le ciel des premiers hommes.