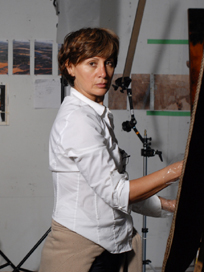 Doïna Harap started to work in the film industry, after graduating in philology in Bucharest, Romania. Soon after, she moved to Canada, where she continued her studies in film production at Concordia University in Montreal.

Following her studies, she worked in television for TFO in Toronto as a director and producer, later she moved on to become a free-lance documentary filmmaker in Montreal.

She independently produced, wrote and directed, through her company https://www.doinaharapproductions.com,  two 52 minutes documentaries based on the life and work of visual artists Sylvia Safdie Earth Marks, broadcasted on Bravo Television and Peter Krausz No Man’s Land broadcasted on ARTV.

All her films were well received at international film festivals, and were broadcasted in Canada, France and elsewhere.

She was a member on the juries of: Vues d’Afrique and Eurofest.