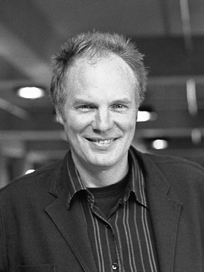 Born in 1958, Philippe Baylaucq studied sculpture and film at the Hornsey and St. Martin’s schools of art in London. His early films, Notre-Dame des Danses (1981) and Promise (1981), show a pronounced taste for daring and experimentation. Barcelone, 1985, cemented his position as an influential figure in art film.

Baylaucq’s artist portraits include one on architect Phyllis Lambert (Phyllis Lambert, 1994) and a choreography of dancer Lucie Grégoire (Les choses dernières, 1994). Lodela (1996), is a magnificent allegory of the origins of the world, celebrating the beauty and fragility of the human body. It won him 11 international awards.

His fascination with creative people continued with two very personal portraits of Quebec painters. He investigated Marcel Baril’s imposing work in FIFA award-winning Mystère B. (1997). In 2000, the canvases of his artist grandfather, André Biéler, were the main source of inspiration for The Art of Time.

In 2001, Baylaucq made his first children’s film, the musical tale Hugo and the Dragon, which toured the world. Next he turned his attention to the legendary Sable Island, off the coast of Nova Scotia, with Moving Sands (2003), selected in several festivals.

While making A Dream for Kabul, a shoot that lasted several years, Baylaucq co-ordinated the filmmaker collective that made Un cri au bonheur (2007), orchestrating the work and writing 2 of the 21 Quebec poems set to film by 11 directors. He is now working on a film on Reford Gardens near Grand-Métis, Quebec.

Baylaucq’s dedication to film has earned him the prix Lumières for his contribution to the advancement of directors’ status in Quebec during his chairmanship of ARRQ (Association des réalisateurs et réalisatrices du Québec) from 1996 to 2000. He has also chaired the Rencontres internationales du documentaire de Montréal since 2005.

A Dream for Kabul
Watch

The Art of Time
Watch