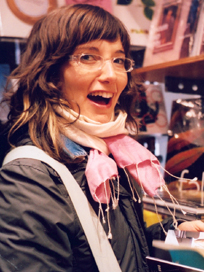 Tally Abecassis graduated from Concordia University, Montreal, in 1996 with a specialization in Communications Studies. Her first documentary, Warshaw on the Main, a slice-of-life documentary about a group of colourful cashiers working at the landmark Montreal supermarket, played numerous times on CBC-Newsworld, CBC, CFCF-12, and Télé-Québec.

In 2005, she completed her second documentary, Lifelike, on the weird and wonderful world of taxidermy. Lifelike played at many festivals, such as SXSW, Les Rencontres Internationales du Documentaire de Montréal, Brooklyn Underground Film Festival, Vancouver International Film Festival, Bird’s Eye View, among others. It was also shown on CBC-Newsworld, ARTV and several international broadcasters.

In Tally’s recent documentary Small Wonders (2009), she filmed 3 small mom-and-pop store-owners for a period of ten years, following the ups and downs of their lives and business. Shot in Super-16mm film, the film is an intimate portrait of the people who run the small businesses in our neighbourhoods.

She has also published Barbershops with photographer Claudine Sauvé, a book about those old-world temples of manhood that are slowly disappearing.

Unlikely Treasures is her fourth documentary.

Warshaw on the Main
Watch