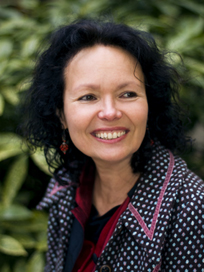 For almost thirty years Manon Barbeau has been working as a script writer and director for several companies and institutions, in particular Télé-Québec and the National Film Board of Canada (NFB). She is also producer and general manager of the Wapikoni Mobile Corporation, La Maison des Cultures Nomades and Les Productions des Beaux Jours.

She first directed Comptines and Nous sommes plusieurs, beaucoup de monde, and then as a resident filmmaker at the NFB’s French Program, Les Enfants de Refus global in 1998 (an award-winner at Hot Docs, Toronto, the Yorkton Short Film and Video Festival and Cinéma du Réel, Paris), in 1999 L'Armée de l'ombre (Gémeaux award for best documentary 2000) and in 2000, Barbeau, libre comme l’art (in competition at FIFA). She wrote the scripts for L’Or rouge in 2000 and the feature-length drama La fin du mépris in 2002, and directed Alain Dubreuil, artiste-démolisseur in 2001 at the NFB (winner at the Golden Sheaf Awards/Yorkton Video Festival).

In 2002 Barbeau founded Les Productions des Beaux Jours Inc. The following year, in collaboration with the National Film Board of Canada, the Assembly of First Nations of Quebec and Labrador and the Atikamekw National Council, she created Wapikoni Mobile and Vidéo Paradiso, travelling video and music studios for Aboriginal communities and inner-city youth. Since 2004, over 260 short films have been produced in the mobile studios, and 31 awards and prizes have been won in various national and international film festivals..

In 2008 she founded La Maison des Cultures Nomades, which has produced shows such as Hip Hop tout en couleurs,  Franco-Rythmes  presented as part of the 12th Sommet de la francophonie in Quebec Cityand Le 8e Feu, bringing together on stage Aboriginal musicians and artists from a variety of cultural communities.

She has recently produced  Wapikoni, escale à Kitcisakik.,a documentary feature film about a visit in this now famous Algonquin community.

In April 2006, Barbeau was honoured for the body of her work at the FCTNM Gala (Women in Film, Television and New Media Montreal). She was Chair of the Observatoire du documentaire du Canadafrom 2006 to 2008.

Since 2007 she has been lecturing on resilience in various environments. In January 2009 she was elected an Ashoka Fellow by the Ashoka Canada Foundation, part of an international organization operating in 63 countries and supporting a network of 2,0000 innovative social entrepreneurs whose work has the potential to bring about significant changes for society.