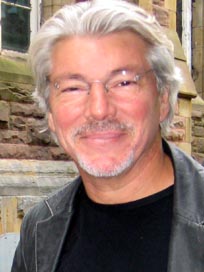 For 30 years, from 1975 to 2005, Pierre Mignault was a career journalist with Radio-Canada, first in Toronto, next covering the Québec Assemblée Nationale, and then in Montréal, where he worked for Le Téléjournal / Le Point news program. As a videographer, he has directed several feature reportages and short Canadian and international documentaries, which allowed him to develop his documentary approach.

For ten years, Pierre Mignault also taught ethics and techniques of journalism at Radio-Canada, here in Canada. Since 2004, he’s been doing training workshops and editorial supervision in developing democracies, specifically in the Democratic Republic of Congo and Haiti.

In 1999, Pierre Mignault and Hélène Magny directed their first documentary, Le Sentier du Milieu, which describes the quest of a man from Quebec who became a Buddhist monk in Burma. Following his progress along the middle path, we discover the role Buddhism plays in maintaining the social and political order in Burma, a country inaccessible to most foreigners. The film was broadcast by Télé-Québec.

Shock Waves, their second documentary, produced in 2007 by InformAction and broadcasted by Radio-Canada, follows three journalists at Radio Okapi, an independent UN-backed national radio station in the Democratic Republic of Congo. In a land where silence is imposed at gunpoint, Shock Waves provides moving testimony to the struggle for freedom of expression and democracy in a country torn apart in the aftermath of war. The film won two Awards: Film Most Likely to Change the World Award (Detroit Docs International Film Festival 2007) and the CIDA (Canadian International Development Agency) Award: Prize for Best Canadian Documentary on International Development (Hot Docs, Toronto 2008). It was also nominated for Best Documentary: Society at the Gémeaux Awards in 2008.