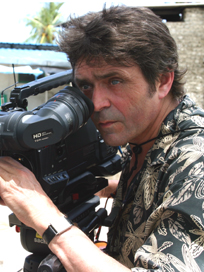 Trained at the Louis Lumière School in Paris, Philippe Lavalette started out as a cinematographer in the world of experimental films, most notably with L'Ange (P.Bokanowski, 1982), a visual poem of great delicacy for which he received a Caméra d'Or nomination at Cannes.

His interests then turned to science, and in association with the CNRS, the French research institute, he directed and photographed a number of scientific film projects.

Lavalette has frequently adapted his documentary approach to fiction, and his innovative style has contributed to the particular atmosphere of several feature films and films for television: Les pots cassés (François Bouvier), Hugo and the Dragon (Philippe Baylaucq) and more recently La Brunante (Fernand Dansereau) and Le Ring (Anaïs Barbeau-Lavalette). He has also contributed to series such as Alys Robi, Les bâtisseurs d'eau, Gypsies, États-Humains 1 & 2 as well as Warrior Women and True Horror for the Discovery Channel (more than 25 million viewers.)

Besides his nomination for a Caméra d’Or at Cannes, Lavalette has received several Gemini Awards and nominations for Best Cinematography.

As a director, he co-wrote the trilogy Rêver le français, a mini-series on the French language for TV5 Monde, and directed Un gamin de Paris (selected in many festivals and chosen for the permanent collection of Hot Docs and the Forum des Images in Paris), Sur les rives du Tapajos, the story of a scientific expedition from UQAM in the heart of the Amazon (Best Canadian Film Festival Téléscience) and Tipolis which chronicles the life of a small police station temporarily located at Cité-Soleil in Haiti.