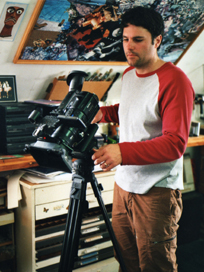 Patrick Pellegrino holds a Bachelors degree in Communications (with a specialization in film) from UQÀM, as well as a Masters in Film Studies from the Université de Montréal. He is a researcher, scriptwriter, filmmaker and director of photography.

In 2006, he wrote and directed his first point-of-view documentary, Senza nostalgia (52 minutes, produced by Idéacom International). The film was broadcast on Télé-Québec and TV5 Monde with great success.  In 2007, he was a finalist for the Prix Pierre et Yolande Perrault, Meilleur espoir documentaire, and the Prix Gémaux, for Best Music and Best Sound. About Senza Nostalgia, he says: “I wanted to show how immigrants are not just a monolithic block who preach multiculturalism. I made a film about my father, an Italian immigrant who lives without nostalgia.”

Following completion of the short film Les enfants de Kitcisakik (2001), he spent several years researching a longer documentary project about the Algonquin Nation of Kitcisakik. In 2007, he completed the documentary Sans réserve (produced by InformAction), on which he also co-signed the cinematography with Dominic Dorval. “I am very interested in these indomitable people who refuse to be parked in a Native reserve for the purposes of assimilating them. The Algonquins of Kitcisakik prefer to live in great poverty, while striving with all their might to become full-fledged citizens of this country. I find that extremely courageous.” In 2008, Sans réserve was nominated for Best Documentary by the Association of Cinema Critics of Québec, in both short- and medium-length categories.

The director film’s feature individuals who refuse to be manipulated in the same way as are the majority of their social group.  Immigrants and aboriginal people may not share the identical struggle, but these two groups, whom he knows well, do have this in common: others often speak on their behalf, and not always in their best interests. Patrick Pellegrino contributes to their struggle by giving a voice to people whose life choices are instrumental in breaking down prejudices held about their social communities.

Since September 2009, Patrick has worked as a journalist for RNC Media, while developing documentary projects in Abitibi.