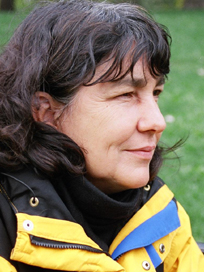 Carole Laganière was born in Montreal. In 1987, she graduated in Film Direction from the INSAS, Belgium. In 1989, she made her first short, Jour de Congé, who won a number of prizes in Europe. On her return to Québec, she directed Aline, which received the Best Feature Film prize at the 1992 Festival de Namur. Happy forays into the genre of documentary-fiction led the filmmaker to choose, with The Fiancée of Life(2001) and The Moon and the Violin (2003), to focus on reality. The latter both won the Gold Award for Best Canadian Documentary at Hot Docs (Toronto) respectively in 2002 and 2003.
She directed in 2004 a documentary about children in East Montreal, East End Kids presented in more than a dozen international festivals (Finalist for Best Documentary at the Jutra and the Gémeaux Awards 2005). She finished Country in 2005 and CityPark, A Little Music for the Soulin 2006.

She’s now working on the sequel of her documentary East End Kids.

City Park, A Little Music for the Soul
Watch

The Moon and the Violin
Watch