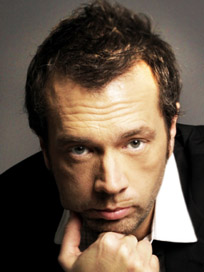 Denis Delestrac is a French award-winning director based in Barcelona. A law and journalism graduate, Delestrac made his debut in non-fiction filmmaking in 2001 and signed a number of hits including IMAX blockbuster "Mystery of the Nile" and “Pax Americana and the Weaponization of Space”, his first theatrical documentary. Selected in major international film festivals and acclaimed by the critics worldwide, the film reveals how space has become the newest arena for countries around the globe to launch their struggle for supremacy. His next feature documentary, “Sand Wars” (to open in 2013) is an epic eco-thriller that takes the audience around the globe to unveil a new gold rush and a disturbing fact: we are running out of sand! A passionate lecturer, Delestrac is devoted to sharing his expertise with students and young professionals around the world. His documentary workshops and master-classes – focusing on international coproduction, development, funding, distribution and access – have been imparted in festivals and universities in Spain, Latin America, USA, France and South Africa.