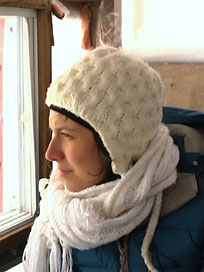 Native of Montreal, Marie-Geneviève Chabot works as an independent documentary filmmaker since 2004. After studying arts, then cinema at UQÀM, she directed her first short film, Art à Scrap, finalist at the competition Vidéaste recherché(e). Afterward, she directed and shooted reportages for Télé Sans Frontières and for the web site Parole citoyenne.

With Bonne chance (NFB-produced, 2005), she went to Africa to direct her first full-length documentary film.

Since a few years, after she directed several independent documentaries, Marie-Geneviève was brought to give trainings in cinema with young people from the native communities of Quebec (with the Wapikoni Mobile) and in Burkina Faso (72 Heures Chrono).

In 2010, she leaves her hometown to settle down in the North of Québec. This new territory inspired her the documentary En attendant le printemps.