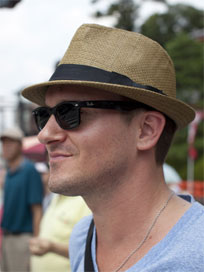 Arnaud joined the team of Last of the Elephant Men in the Spring of 2013 as Co-Director and Director of Photography. He spent over five months filming in Mondulkiri Province, living with the Bunong and their domesticated elephants. Arnaud has filmed in over 45 countries, beginning with his work on the documentary, Buenos Aires no llores, shot in Argentina in 2002 during the economic crisis. He then worked on If I had a Hat (co-directed with Anaïs Barbeau-Lavalette), interviewing Yasser Arafat shortly before his death. His work on several high-profile documentary TV series has dealt with the plight of x children (Leaving for ideas), night workers (Walk on the Night Side), and orphans in Port-au-Prince after the 2010 earthquake (Haiti Built Me). From 2010-2013, Arnaud directed a magazine program about responsible tourism for three seasons (Leaving differently). His TV productions have been broadcast on TV5, Radio-Canada, RDI, ARTE and France Télévisions. As Director of Photography, his most recent projects include a documentary shot in Iraq on the Kurdish front against ISIS (Kurdistan by Hook or by Crook, directed by Julien Fréchette). Arnaud has taught video production to various disenfranchised communities, including the Wapikoni Mobile project in Atikamekw and Algonquin communities, and organized a workshop for the actors of the film, City of God, in a favela of Rio de Janeiro. In 2009 he produced and directed the documentary short, Mohammed Rewind, that generated controversy in Montreal and went on to travel to many international festivals. Last of the Elephant Men is his first feature documentary.

Walk on the Night Side
Watch